Be AWAKE.
Be ALERT.
Pray for WISDOM, DISCERNMENT & UNDERSTANDING.
Check the SOURCE MATERIAL.
IDENTIFY THE LIE, EXPOSE IT & SHARE IT WITH EVERYONE.

Still in love with himself and viewing life of us peons from his high lofty perch, the CES says dems lost in 2016 because “people were so focused on me”.

“”…more as people making the mistake of falling too much in love with him.” Obama pontificated, “I’ll be honest with you, if I have a regret during my presidency, it is that people were so focused on me and the battles we were having, particularly after we lost the House, that folks stopped paying attention up and down the ballot.””
“…“Do not wait for the perfect message, don’t wait to feel a tingle in your spine because you’re expecting politicians to be so inspiring and poetic and moving …” [[me: or leg Mr. Matthews]]
“…Then, the man on whose watch racial division became far more of an issue than it had been for years stated, “All these people that are out here kvetching and wringing their hands and stressed and anxious and constantly watching cable TV and howling at the moon, ‘What are we going to do?,’ their hair’s falling out, they can’t sleep. The majority of the American people prefer a story of hope. A majority of the American people prefer a country that comes together rather than being divided. The majority of the country doesn’t want to see a dog-eat-dog world where everybody is angry all the time.” Obama concluded of Trump and the GOP, “They’re mad even when they win.””  [[[me: clearly his message is lost to the unhinged radicalized democrats]]]

2 cents:
CES and the radicalized left, the message & reality of MAGA is a message of hope for EVERYONE in the USA unlike the faux-message of hope CES said.

OUR PRESIDENT IS FULFILLING THE PROMISES HE MADE. HE SPEAKS OF UNITY and NOT FANNING FLAMES TO PROMOTE A RACIAL WAR.
OUR PRESIDENT, WHO LOVES THIS COUNTRY (u would think that would be a requirement to be a president of our country!)

BTW mr. CES, millions are looking forward to when everyone in the USA and most of the world finds out about EVERYTHING YOU DID. You will have plenty of time to talk about yourself.

In this article, WPo does “an honest” assessment of chief empty suit’s 8 years and all the promises he made. The article appears to have been wrote 1/23/17, so its after we finally got rid of this muslim socialist who was trying to ‘TRANSFORM THE USA” into his own likeness.
In this article, WPo is assessing President Trump. Note it was last updated 4/30/18. Note they are tracking but promises broken are not only not updated to show that they were kept but that WPo is showing them broken if he hasn’t fulfilled the promise as of 4/30/16. Significance, the optics – it implies that he has broken 16 promises.

Wonder why WPo didn’t write this article after his presidency like they did with CES?

Why would Microsoft not be willing to be transparent about what they consider as “hate speech”?

Wait? What happened to the feud?
Well folks, NO SURPRISE HERE: No feud…
Check at the below the halfway down point of the story: 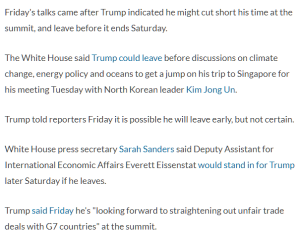 But you see, the average liberal won’t read the story, just the web search or the title. Maybe they will quick scan the article looking for hate fodder = talking points of MSM.

No, FAKE NEWS doesn’t happen.
Gee, I wonder how many organizations will pick up that false story.