Mustafa Bakari, an Egyptian politician, issued a brutal assessment of U.S. Ambassador to Egypt, Anne Patterson. Bakari stated, “In my opinion, she [Patterson] is a member of the sleeper cells of the Brotherhood, likely recruited by Essam al-Erian or Muhammad al-Baltagi.”

In a June 18 speech, Patterson made the following statement in a speech about the turmoil in Egypt:

“Some say that street action will produce better results than elections,” Patterson said. “To be honest, my government and I are deeply skeptical.”

Patterson, who is reportedly in line for a promotion as Assistant Secretary of State for Near Eastern Affairs, has been increasingly viewed, according to Hudson, as the “key implementer for a policy that at least offers tacit support to the Muslim Brotherhood.” Article here

Israeli Prime Minister Benjamin Netanyahu told CBS News’ Face the Nation that Iran will reach the “red line” he laid down at the United Nations in Sep. 2012–90% uranium enrichment–within “a few weeks,” and that Israel will be prepared to act. “I won’t wait until it’s too late,” he told CBS News’ Bob Schieffer.

Netanyahu described Rouhani as a “wolf in sheep’s clothing” whose strategy was “smile, and build a bomb.” He insisted that Iran “stop all enrichment of nuclear material, take out the enriched uranium, and shut down the illegal nuclear facility in Qom,” or face harsher sanctions and, in the last resort, military action. Article here

Thursday, the Egyptian military reported that a security operation carried out by the armed forces in northern Sinai in the past 48 hours had led to the deaths of 10 jihadists. Armed militants killed three Egyptian policemen in earlier separate attacks overnight.

Thursday, DEBKAfile reported that the security situation in Sinai and along the Egypt-Israel frontier is rapidly going from bad to worse. The Islamist coalition’s war on Egyptian police and military positions has gone far beyond the isolated strikes here and there reported by official spokesmen, DEBKAfile’s military sources report.

Hundreds of Salafist Bedouin, Muslim Brotherhood adherents and Palestinian Hamas and Islamic Jihad fighters from the Gaza Strip have joined forces to block northern Sinai’s key road arteries. They have stopped traffic to the Egyptian-Israeli border terminal at Nitzana, to the US-led multinational national observer base at Al Gora near El Arish, and to the big cement factory built by the Egyptian military in El Arish which is the region’s main source of employment.

By blocking those roads, the Islamist fighters have choked off the movement of goods between Egypt and Israel and placed 1,000 MFO troops, including some American officers, under siege.  Any vehicle driving in or out of Al Gora comes under anti-tank rocket fire. Flyers have been distributed forbidding locals to take jobs with Egyptian security forces or MFO.

The Islamists are now attacking Egyptian military and security targets at the rate of 30 strikes a day, traveling at speed between targets in minivans on which rocket launchers and heavy machine guns are mounted, or using motorbikes for raiders brandishing rocket-propelled grenades.  Article here

Collect it all:
In late 2005, as Iraqi roadside bombings were nearing an all-time peak, the National Security Agency’s newly appointed chief began pitching a radical plan for halting the attacks that were killing or wounding a dozen Americans a day.

At the time, more than 100 teams of U.S. analysts were scouring Iraq for snippets of electronic data that might lead to the bomb-makers and their hidden factories. But the NSA director, Gen. Keith B. Alexander, wanted more than mere snippets. He wanted everything: Every Iraqi text message, phone call and e-mail that could be vacuumed up by the agency’s powerful computers.

“Rather than look for a single needle in the haystack, his approach was, ‘Let’s collect the whole haystack,’ ” said one former senior U.S. intelligence official who tracked the plan’s implementation. “Collect it all, tag it, store it. . . . And whatever it is you want, you go searching for it.”

The unprecedented data collection plan, dubbed Real Time Regional Gateway, would play a role in breaking up Iraqi insurgent networks and significantly reducing the monthly death toll fromimprovised explosive devices by late 2008. It also encapsulated Alexander’s controversial approach to safeguarding Americans from what he sees as a host of imminent threats, from terrorism to devastating cyberattacks. Article here

The corrupt, unethical & immoral presidential leadership of the USA needs to be rebuked and removed for its inability to behave in a ethically moral way. His – the president – MO of shooting off his mouth, getting in the way of historical allies, sticking his nose in everyone’s business while ignoring the substantial problems in his own country —- needs to come to an end. While it is true that his actual post is a reflection of the glaring problems in the society of the USA moral, spiritual and philosophical fabric; that should not provide him license to behave in the manner he has since winning his first election. Leadership should not be reduced to a benchmark of society. Leadership is suppose to lead and pull the organization/people up with them and thereby hopefully others who are watching as well. We have a leadership vacuum in the executive and legislative branches of our government. We NEED an AMERICAN SPRING.

Today’s Debka article summarizes two recent shenanigans of the current WH administration. Please take a brief moment and look at the reasoning behind the actions.

“To calm the tension, the US Embassy in Egypt said on its website Saturday: “We deny false claims in the Egyptian press that US naval ships are in the vicinity of the Arabian Peninsula and the Suez Canal to militarily invade Egypt.”

According to our sources, the US flotilla was brought in to warn Egyptian strongman Gen. Abdel Fattah al-Sisi and his generals that if they took their persecution of the Muslim Brotherhood too far, American Marines stood ready to step in.”

“The Obama administration is signifying its strong disapproval of Israel and Egypt taking matters in their own hands in the last two weeks, DEBKAfile’s military and Washington sources report: Israel was accused of independent military action against Syria, and the Egyptian army of persecuting the Muslim Brotherhood after deposing President Mohamed Morsi.

Washington is also highly displeased with the campaign the Egyptian army launched after the coup, with Israel’s active support, to root out the Islamist terror blighting the Sinai Peninsula. US warships and marines are now parked off Egypt’s Red sea coast as a deterrent to the generals in Cairo.

For whipping Israeli into line, the administration used another method, i.e., Pentagon leaks naming Israeli air strikes as responsible for the explosions at the Syrian weapons depot outside the port town of Latakia on July 5, which demolished a fresh stock of Russian Yakhont (NATO codenamed SS-N-26) shore-to-ship missiles along with their advanced radar.
Although CNN ran this leak Friday, July 7, sourcing it to three separate unnamed US officials, the New York Times repeated the story Saturday and it was picked up by more US media for the third day running on Sunday.

The president of the USA has pointed out to Russia and the Syrian allies that Israel was responsible for attacks on weapons pipelines in the nation of Syria.

This is further proof about the inclinations if not out right beliefs of the that pathetic president of the USA.

“If Europeans are to overcome their fear of giving up sovereignty in order to achieve political union, a civic sense of attachment to Europe and its institutions must be regained and nurtured.”

“The EU is one of the great political milestones of mankind. For this reason, and in order to emerge stronger from the difficult situation in which Europeans now find themselves, Europe’s leaders must work with the conviction that the future is inexorably linked to a more integrated and more capable Union.”
Read more at http://www.project-syndicate.org/commentary/exploiting-europe-s-new-political-cycle-by-javier-solana#8myhXyTUpSOolUQ0.99

The above is taken from a recent article by Javier Solana who was EU High Representative for Foreign and Security Policy, Secretary-General of NATO, and Foreign Minister of Spain. He is currently President of the ESADE Center for Global Economy and Geopolitics and Distinguished Fellow at the Brookings Institution.

A succinct synopsis of the stupidity and failed leadership of the WH and its chief empty suit.

See when you “lead from behind” what you are really doing is attempting to be on the winning side. When you play both sides you are doing the same thing.

When you are caught doing this you will not be trusted, you are perceived as trouble and you reveal your natural yellow colors.

It seems the people of Egypt understood where the inclinations of our so-called president was and is. Why our MSM did not show the banners that have been displayed over the PAST YEAR provides a hint of the fact that MSM is in many ways the Federal Media.

The mis-impression (as noted in the article) was only possible because the chief idiot was not listening, paying attention but more importantly because of the philosophical and religious inclinations he has – put another way – where his affinity lies. The truth of the matter is – there was no “mis” in the impression.

Egyptian Army Chief Abdel Fattah Al-Sisi took to state television to announce that the head of the country’s constitutional court would take over as president until new elections are held.

“We’ll build an Egyptian society that is strong and stable, that will not exclude anyone…and end the conflict,” Al-Sisi said. He said military leaders had urged Morsi to do more to meet protesters demands, but he did not go far enough to meet a 48 hour ultimatum the country’s military declared on Monday.

“The speech of the president last night, before the 48 hour deadline, did not achieve the goals of the people,” the Army chief said. He said it prompted the militay to act  “based on its own national and patriotic duty.”

But also a big story from out of Egypt that has yet to gain traction in the USA – confirms what I have been writing and saying about our president.

I have snatched copies of the images so I can ensure that if the story gets removed I still have the images to share with people.

Obama’s embracing, rooting and supporting of the MB and Morsi tipped his hand and showed his heart. The people of Egypt – those who have led to Morsi’s outster, have no interest in becoming a fundamentalist, Islamist state. They want democracy, a republic, tolerance and appreciation of diversity as well as transparency of the government. 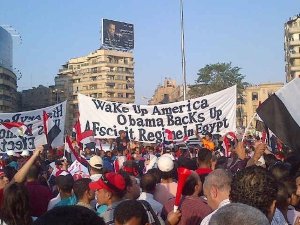 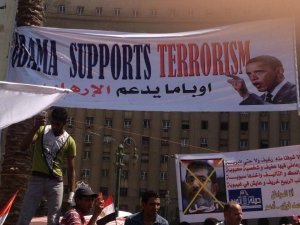 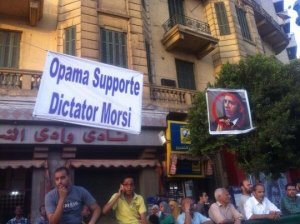